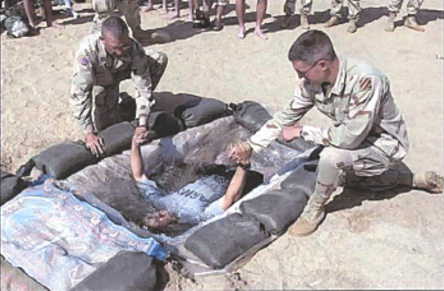 However, there is no guarantee that our lives will be perfect since we will always have to be on the alert for satanic attacks (disobedient persons who mock and humiliate us) which will try to destroy us.  While we have this consolation, Jesus said "I will never leave you or forsake you" (Hebrews 13 : 5).  We have God's spirit-filled words (John 6:63) to guide, direct, and to keep us on the path of righteousness if we study (II Tim. 2:15 [KJV], II Tim. 3:16-17).  The scriptures are God-breathed; it is what God says will make us fully-fitted for every good work!

Remember to keep the men and women of our Armed Forces in prayer daily.

Similarly, those in the Ark were saved; but, those outside the ark were doomed.  The saved now enter God's "Ark", the church or kingdom, which Jesus preached, and Daniel (Dan.2:44) and the prophets, prophesied about (Isaiah 2:2-3;  Micah 4:1-2).  The Christians now live in safety under Our Lord's spiritual protection and direction through the Word.  The church is NOT the building, but the individuals, who have complied with the conditions as set out by the Testator, or Benefactor OUR Lord and  Savior Jesus Christ.  Men become loyal to their Savior --  not the Preacher, not the building, nor the elders, whose function is to oversee by teaching and guarding the flock from error.  Saved individuals will endeavor to live lives following the instruction manual (the New Testament or Will for those who would follow Jesus).

A.  WHAT DOES IT MEAN TO BE SAVED?   (Acts 2:38)
1.    One has to be lost in order to be saved.
2.    One is lost when he/she has been in a constant living situation without regard for Gods law  willingly or ignorantly.
3.    Disregard for God and His law is considered to be sin and everyone from the lowest to the greatest  are guilty of it (Romans 3:23).
4.    Sin is the transgression of God's law.
5.    Sin is punishable by death or spiritual separation from God.

B.  WHAT DOES THE BIBLE REQUIRE MAN TO DO TO BE SAVED?

1.   Belief is the first prerequisite and condition for salvation -- believing the facts of Jesus' death, burial and resurrection on behalf of our Sins.

2.  Belief involves trusting in the authenticity of the records which inform man that Jesus was real and walked the earth with the ultimate aim of saving man from his sinful condition by being sacrificed  on a cross for all of man's sins.  Pagans understood that the  shedding of blood was a requirement to appease an angry god [Hebrews 9 : 13-15].  Jesus gave Himself as a sacrifice for the sins of the whole world.  The world crucified Jesus the Son of the Living God.  Only the death of God's only Son could satisfy God the Father as an atonement for all man's sins.  This act is called a "propitiation".  The facts have to be believed in order for the commands to be obeyed.

3.   In a court of law it is required that there be two or three witnesses to establish a fact.  Well -- Jesus went beyond the three and produced twelve, who witnessed His Life, miracles, wonders and the whole proceedings of the crucifixion, the sacrifice and the resurrection which proved He was the SON of GOD.   The record of those  witnesses are true (2 Peter 1:16-19).  These men were uneducated  by worldly standards and were simple fishermen; rough bred Jews who were ready to fight to protect their Master. They knew no language but their own; but, with God's power, they were able to spread  the wonderful message of salvation to all  mankind speaking in different languages which the Holy Spirit laid upon them.  They  traveled to many other lands where there were other dispersed Jews teaching and preaching the good news of Jesus.  Later, they were able to go into other parts of the Gentile world.

4.  When feeling the guilt of one's sins and following it with Godly sorrow one repents which is the second requirement or condition set by the benefactor.

5.  Repenting involves turning one's life around from the direction he/she was going and obeying the requirements of  the benefactor who gave His life for you. When a person gets to a point that he/she is tired of their sinful lifestyle and is looking for a way to change it, feeling sorry for their state, they want to turn from it.  This is repentance. ( Read how the murderers of Christ repented.  All this is recorded in the book of Acts 2.)

6.  This repenting state leads one to the next requirement or condition of salvation, i. e. dying to the old personality in the form of Baptism or immersion in water.  Since babies cannot believe, it does not apply to them.  Baptism is the act of dying to oneself, and rising up out of the water to put on a new personality, i. e. the personality of Christ (Galatians 3:26).

7.  Baptism, or immersion in water,  saves also because it is part of the conditions set out  for which man must comply in order to be saved (1 Peter 3:21).